The federal government, through the Interior Ministry, has declared Tuesday, July 20, 2021, as a public holiday as Muslims celebrate their annual Eid-ul-Adha.

This was announced in a press release issued by the sector Minister, Ambrose Dery.

“The general public is hereby informed that Tuesday, twentieth July 2021, which marks Eid-ul-Adha, is a statutory public holiday and should be observed as such throughout the nation,” the statement read.

Eid-ul-Adha is an Islamic festival to commemorate the willingness of Ibrahim, also called Abraham, to observe Allah’s (God’s) command to sacrifice his son.

Muslims internationally began this year’s month-long fasting on April 13, to mark the eighth month of the Islamic calendar.

The festival is commemorated by offering special prayers and slaughtering livestock, often a goat, sheep, or a cow.

The National Chief Imam, Sheikh Dr. Osman Nuhu Sharubutu, has announced that this year’s national Eid-ul Adha prayers shall be marked inside the new Mosque Complex at Kawkudi on the Kanda highway in strict adherence to the covid-19 safety protocols.

Read the full statement below: 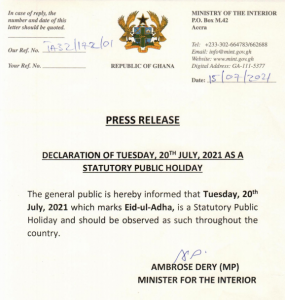